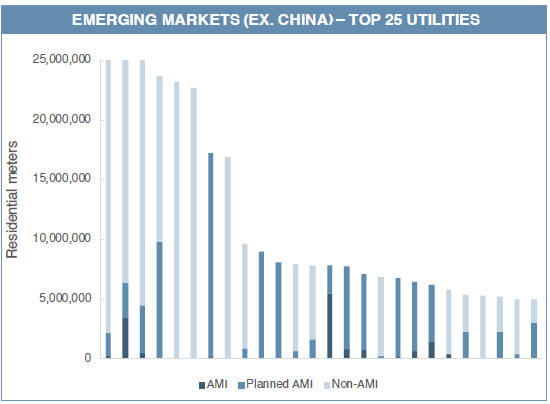 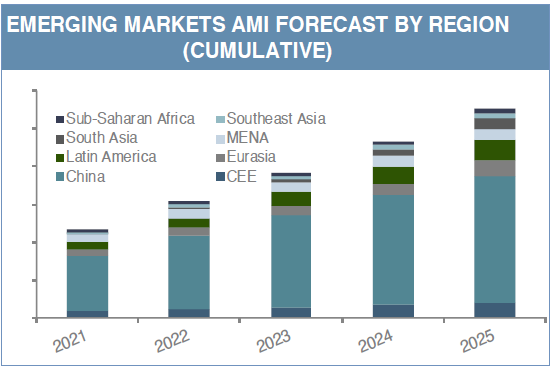 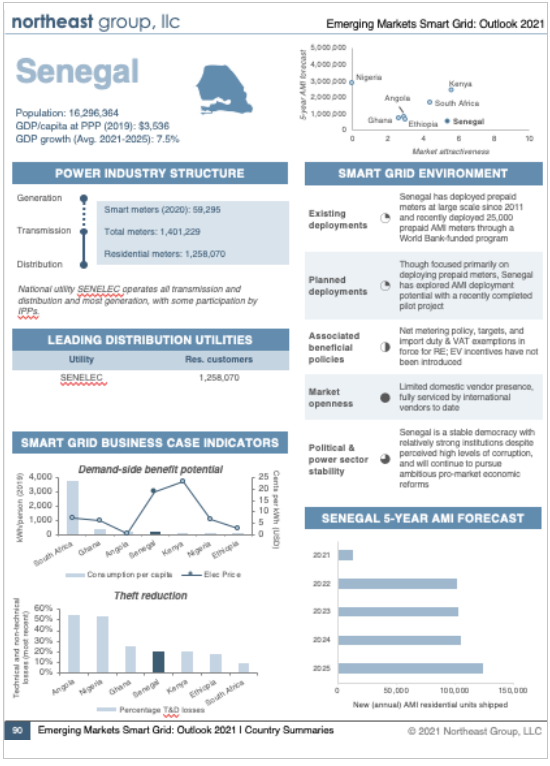 In addition to the figures and tables shown above, each country summary includes the following:

Therefore, this study includes over 100 additional unique charts and tables in addition to those cited above.

Northeast Group's “Emerging Markets Smart Grid: Outlook 2021” is the tenth edition of its annual emerging markets smart grid forecast. With the 2020s well underway, emerging market (EM) countries are shifting from their long-time status as areas of promise to one of immediate large-scale smart grid infrastructure investment. Most major first-time AMI deployments in North America, Western Europe, and East Asia are spoken for, and vendors will increasingly shift their focus to opportunities opening up in countries across all EM regions. This study highlights the 50 EM countries that will see the highest levels of investment over the next five years.

While the new decade is certain to be one of unprecedented growth in EM smart grid markets, it is off to a shaky start, blindsided by the Covid-19 pandemic. Nationwide shutdowns and global supply chain interruptions led to project delays in virtually all global regions. But 2020 was far from a lost year for the smart grid industry, as paused projects resumed relatively quickly, and the total impact on the smart grid infrastructure market proved to be less than initially feared. In fact, in the long term, Covid-19 could have a positive impact on the global smart grid market, having drawn unprecedented attention to the value of remote metering, particularly in EM regions, where struggling utilities were rendered unable to collect revenues during national lockdowns.

Overall conditions for sustained growth in EM markets have steadily improved. Non-technical loss rates remain high and are often the primary driver for smart grid infrastructure investment. EM countries are poised to rebound within a year or two from the ongoing global recession, allowing GDP and electricity consumption rates to continue their rapid rate of growth. Per-endpoint AMI prices have fallen significantly, and models for policy and financing design have been demonstrated by leading EM countries. By the mid- 2020s, EM activity will be highlighted by countries including India, Brazil, Mexico, Egypt, numerous countries in Central & Eastern Europe, and China, which remains dominated by domestic manufacturers.

The obstacles and risks typical of doing business in emerging markets persist, with the realistic opportunity varying widely from country to country. But prospects for global EM smart grid infrastructure market growth have never been stronger, leading to $91.4 billion invested across these 50 countries over the next five years.

Key questions answered in this study: